I read way too many Reader’s Digest bear stories when I was growing up, and therefore had an almost paralyzing fear of running in to them while camping. I knew bears if not fed by humans instinctively would run away so I was more afraid of what would happen to my trailer when sitting out alone. After all it was marinated in delicious smells like bacon and pork chops. My Service Manager at LA Airstream did say he had only seen two instances where a bear had torn into an Airstream. Burt in my logic… that was two too many! 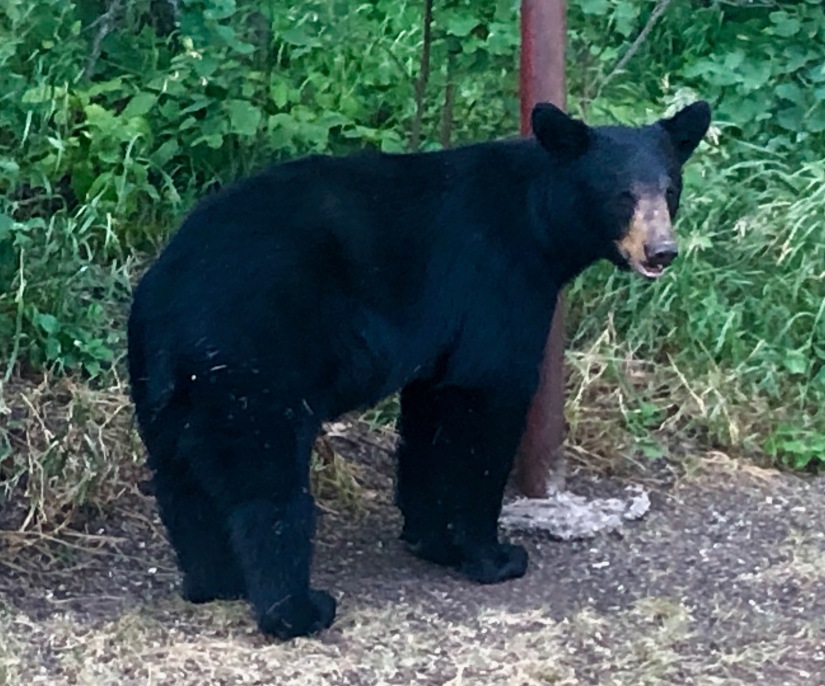 I smiled and said “Oh, what… did they leave the door open?”

He said “No, bears don’t go through doors, they ripped it open like a tin can. But the odds or so against anything happening to you.”

I read everything I could on bears, and of course all of the attacks kept coming up. Go figure! There was the park ranger who had bear spray on him but the bear was on him in 15 seconds so he didn’t have time to get it out. He hit the bear in the head with his hatchet. But he had to repeat that performance as the bear charged twice. He was glad to escape but felt bad discovering later that the bear was a mama bear.

I spent time talking with the REI experts, and invested lots of money in way too many “bear canisters”. I was told to put food and bathroom toiletries, and basically anything that had a scent in it and place the canisters several yards away from the trailer. Well, they were good for dog food containers, and extra stools to sit on at the campfire, and even an elevated desk for my laptop so I could write this blog. However, I’ve given a few away as they emptied seeing that I couldn’t put my stove or microwave in one, boh of which were loaded with good smells. I also chickened out and parked at the cottages by the lake instead of boondocking in the middle of the field.

Well, I saw bears daily. They were almost always mama bears with triplets. This was the year of the bear in Manitoba. All of them were quite beautiful, some were cute. I was in awe at how they moved, dancing across the ground, flopping up trees in three graceful swoops of their overly long arms, always quiet and always fast. Honestly, I come away with no new real wisdom except what is already out there. Absolutely don’t engage. They need to keep that sense of fear of humans as another carnivorous animal. Someone said bears can smell that we are meat eaters…. I don’t know about that, but I did keep my distance and have incredible respect for their power, grace and beauty.

Dudley? The National Parks had said do not take small dogs on trails as they will irritate the bears and may cause them to charge. Great! Well…. he felt it necessary whenever he found bear poop to put his little doggie poop right on top of it. And if he realized the bear was nearby, his voice would lift up in loud barks. In the photo at the beginning of this blog all three little cubs were hiding behind the tree they had climbed with only their paws showing, until Dudley barked, at which in unison they all peeked out. Mama bear stayed hidden below. Thankfully we were in the truck.

On the night we heard a pack of coyotees howling, Dudley took his best coyotee stance and howled and howled right back. If I can ever figure out how to add videos I will add that. It was quite funny. The coyotees actually stopped howling. 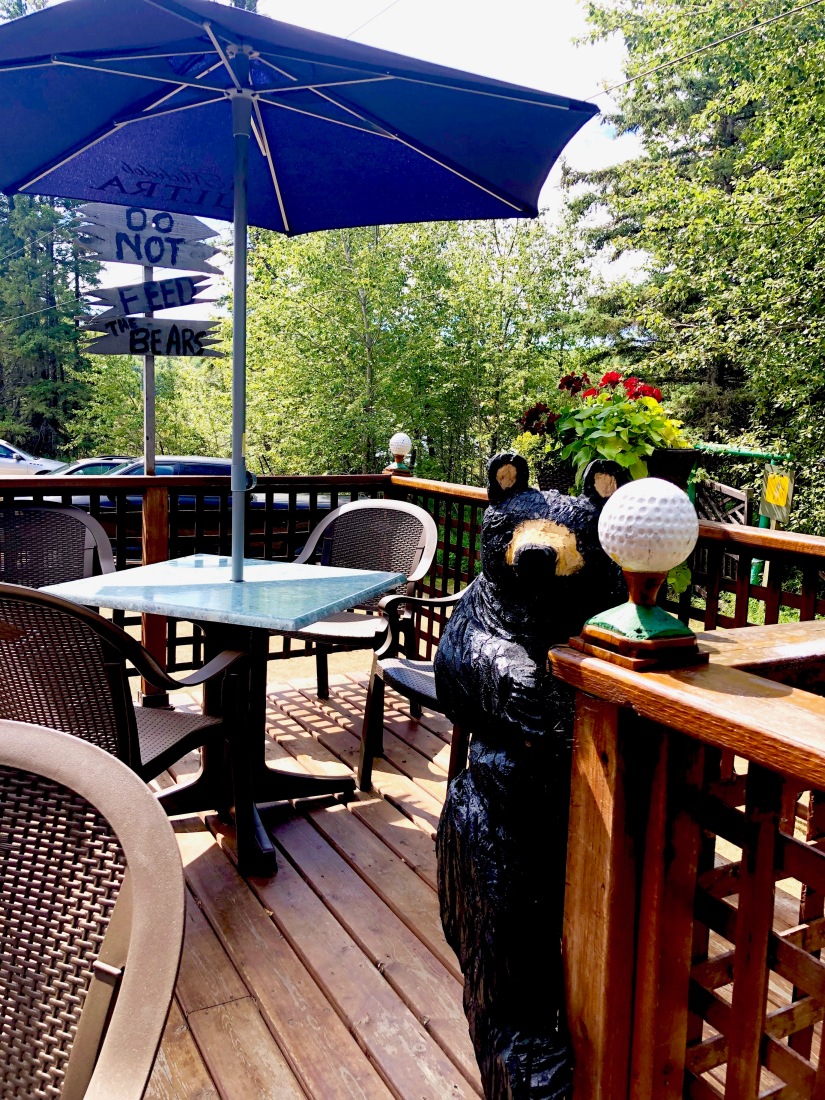 I guess the lesson learned can be summed up in this final bear photo. Don’t feed the bears, or wildlife for that manner. Don’t make them familiar with humans. Keep a respectful distance and they will too. 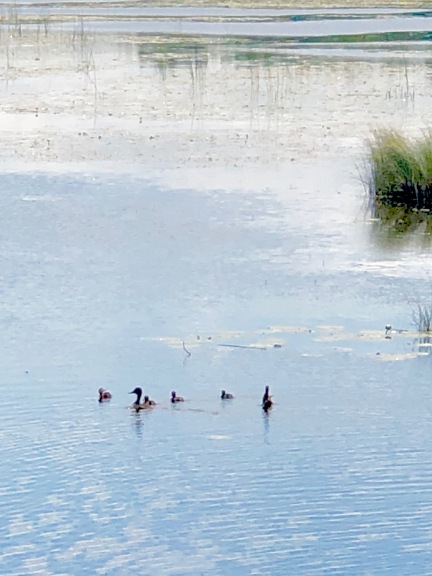 The biggest threat to Dudley was the birds that would swoop down on him when he was sun bathing on the deck. And of course, if we had seen a Bull Moose, they are known to be much more dangerous. Large buffalo, horses and fox, we viewed from the safety of our vehicle. The fun part was all of the variety of wild and domestic animals that we did see. If you love that kind of thing, head to Canada somewhere near or in Riding Mountains National Park and you won’t be disappointed. 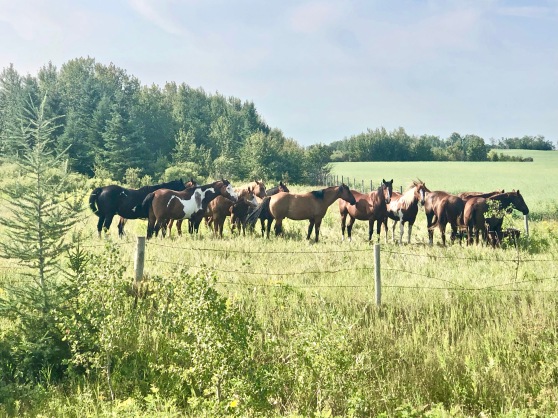 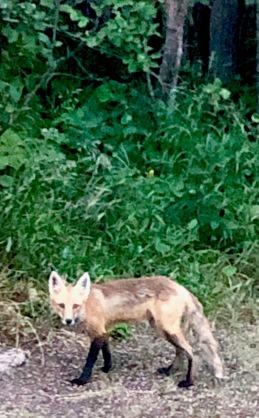 My fear of bears, has lessened just a little, at least Black Bears. I think I’ll leave grizzlies for someone else to write about!

2 thoughts on “Oh My! What Big Teeth You Have! Bears, Wildlife & Airstreaming”